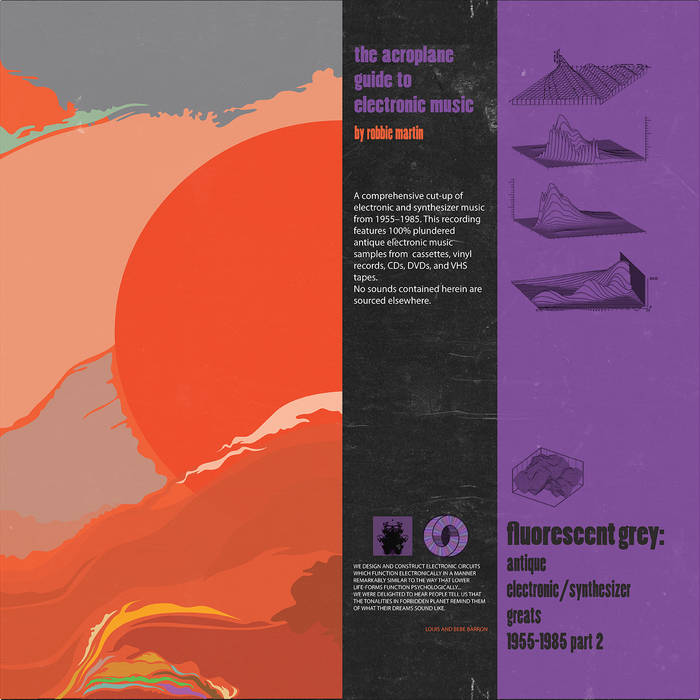 The concept: to construct new songs solely out of sampled material from
three decades of the pre-rave electronic music era. A year after the LP's
release, Fluorescent Grey (government name; Robbie Martin) continued to add new finds to his expansive collection of obscure electronic records. It quickly became clear that the wealth of obscure material warranted a newer iteration (or two) of the concept. The conceit has evolved --the sources unearthed are often more obscure, and the composition is far more reliant on vinyl record samples from Robbie's personal collection, avoiding represses whenever possible. The modernity cut off was extended from the original record, from 1984 to 1985. This 'modern' electronic music brings in FM and other digital synthesis as well as samplers, in contrast to Part 1 which primarily plundered vintage analog synthesizer samples.

Differentiating itself from other primarily retro sample based works (Luke
Vibert's Kerrier District comes to mind), no micro-editing was done nor
original instrumentation added to channel the classic sounds. Instead,
locked groove snippets of drums or background ambiance were arranged to create a soundscape completely reliant on the source material. Another inspiring predecessor in this vein is Richie Hawtin's De9 Transitions (mixes comprised of small loops of up to 8 different techno songs playing simultaneously). AAEMP runs the gamut in its loop selections, from italo disco to Raymond Scott, from a John Carpenter bassline to an Asmus Tietchens hi-hat riff.

New collaborators include Kush Arora on 'The Silver Apples of the
Penobscot'. This track, alongside 'Vend Blank Cyst Now, Sacrilegious' and 'Garage In the style of David Tudor' abandons micro-loops for handcrafted sample packs (one-shot samples like drum hits) sourced from vintage vinyl. Sometimes themes are more apparent, as in the case of an imagined supergroup of female electronic music pioneers of the early 80s: Grace Jones, Grace Slick, Laurie Anderson and Kate Bush get together to issue the dreamworld's feminist response to the male ego's domination of electronic music in 'We Are Not Robots To Do With As you Please," a joint effort with female electronic musician Black Fuhrer. Electronic music critiques are irreverently delivered on titles like 'The Space Between The Last Two Times Genesis P-Orridge Claimed He Invented Acid House' which mixes Chris Carters synths and GPO's live TG-era vocals from Throbbing Gristle live shows with vanguard Moebius & Plank and Charanjith Singh to conjure up a dark proto-acid techno. Fluorescent Grey calls it "a tribute to a 'what if' scenario if Psychic TV was actually making acid back when it would have usurped DJ Pierre and actually mattered as a milestone in electronic music." "Derrick May's Assertion that Techno sounds like Kraftwerk and George Clinton stuck in an Elevator is Inaccurate" breaks down the premise of Derrick May's infamous quote by responding to the question with a literal answer of what could be expected if Kraftwerk had actually collaborated with P-funk. It sounds absolutely nothing like techno. The cold minimalism of Kraftwerk is completely eclipsed by and infused with George Clinton's gratuitous cyberfunk. Many of the tracks sport confounding titles like 'Bridegroom Groin Igloo' -- which on the surface seems to be a commentary about marriage lowering libido, but upon closer examination
reveals an anagram of artists sampled for the track (Bride Groom Groin
Igloo = Goblin Giorgio Moroder). Beyond this example, the anagrams become more opaque and the depth of obscure source material does not make for an easy puzzle to solve.

The finale track 'Ambiente 78' distills bits and pieces from new-age synth
workouts and scratchy vinyl records playing electronic film score fragments to evoke Fluorescent Grey's non-plunderphonic work, specifically the recent three disc boxed set 'Ambiente released on his Record Label Records imprint. New technology that enables individual retuning of the notes in a synth chord sample allowed for the construction of an entirely new melodic composition out of a pre-existing golden age synth riff. This technique is also in effect in other tracks like 'Brian Tregaskin's Grandpa, Alan Hawkshaw' wherein samples from Patrick Moraz, Hawkshaw and Quick Culture and masterfully merged with a Sequential Circuits vocoder demonstration 12" from 1978, despite having no common melodies or keys. The end result of this software manipulation is a song that resembles a much more contemporary sound comparable to Rephlex's The Tuss.

Bandcamp Daily  your guide to the world of Bandcamp